With Kakeibo, you have a financial overview of your income and expenses within seconds. This smart free app also helps you save hundreds of dollars per year. It contains features that can prevent late payments, assist users to pay up their debts, and meet their financial goals.

People tend to have problems saving their finances, and as a result, they overspend even probably more than what they earn. How might we design a platform where people can easily save money by keeping a record of all their finances in one app.

What I did:
First, I decided to focus on direct and indirect competitors, apps that have same or almost the same features as related to finance management, apps like Mint, Ynab and Goodbudget.

What I did:
II interviewed ten people, five from Nigerians, three from Indians and two from the US in one week. All of which have been involved in using one or more applications for budgeting and keeping track of their finance. They use apps like Vbank, Mint, Google Pay, Goodbudget, Budgetbakers and bank App.

Some Questions I Asked

What I did:
After the discovery phase was complete, I decided to create three personas based on the various ways a user would want to interact with the potential application.

I decided to focus on the core problems of the user and what their goals, thoughts, and needs were. I wanted to create a story for each individual, from how they first heard about the app to the final phase of their user journey. 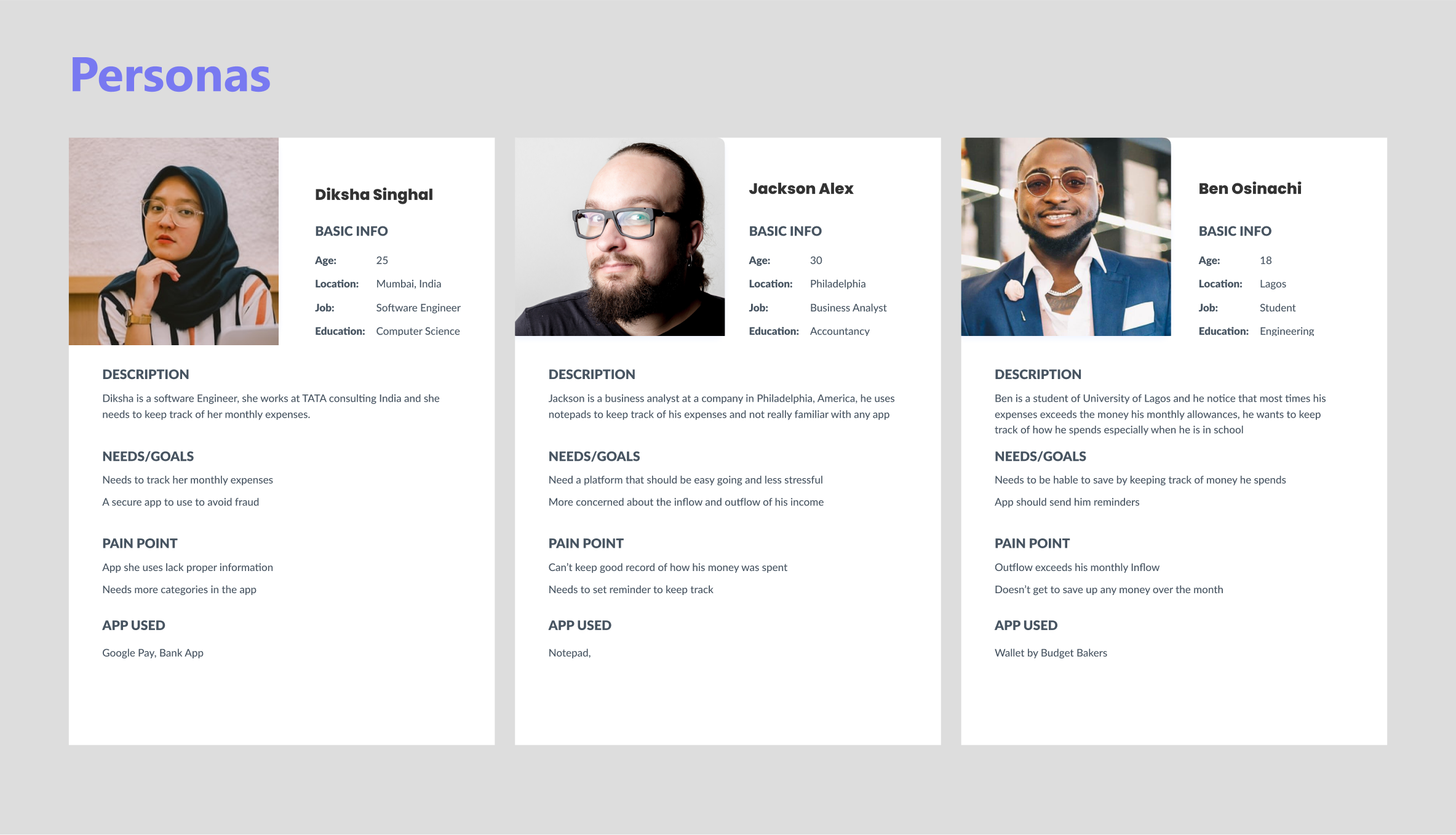 What I did:
The user Journey was mapped out to understand the experience from the users' eyes; it creates an understanding of their interaction with the product as well as improvements required in the future. I crafted the user journey based on the customers goals, touchpoints, feelings, thinking, and pain points. 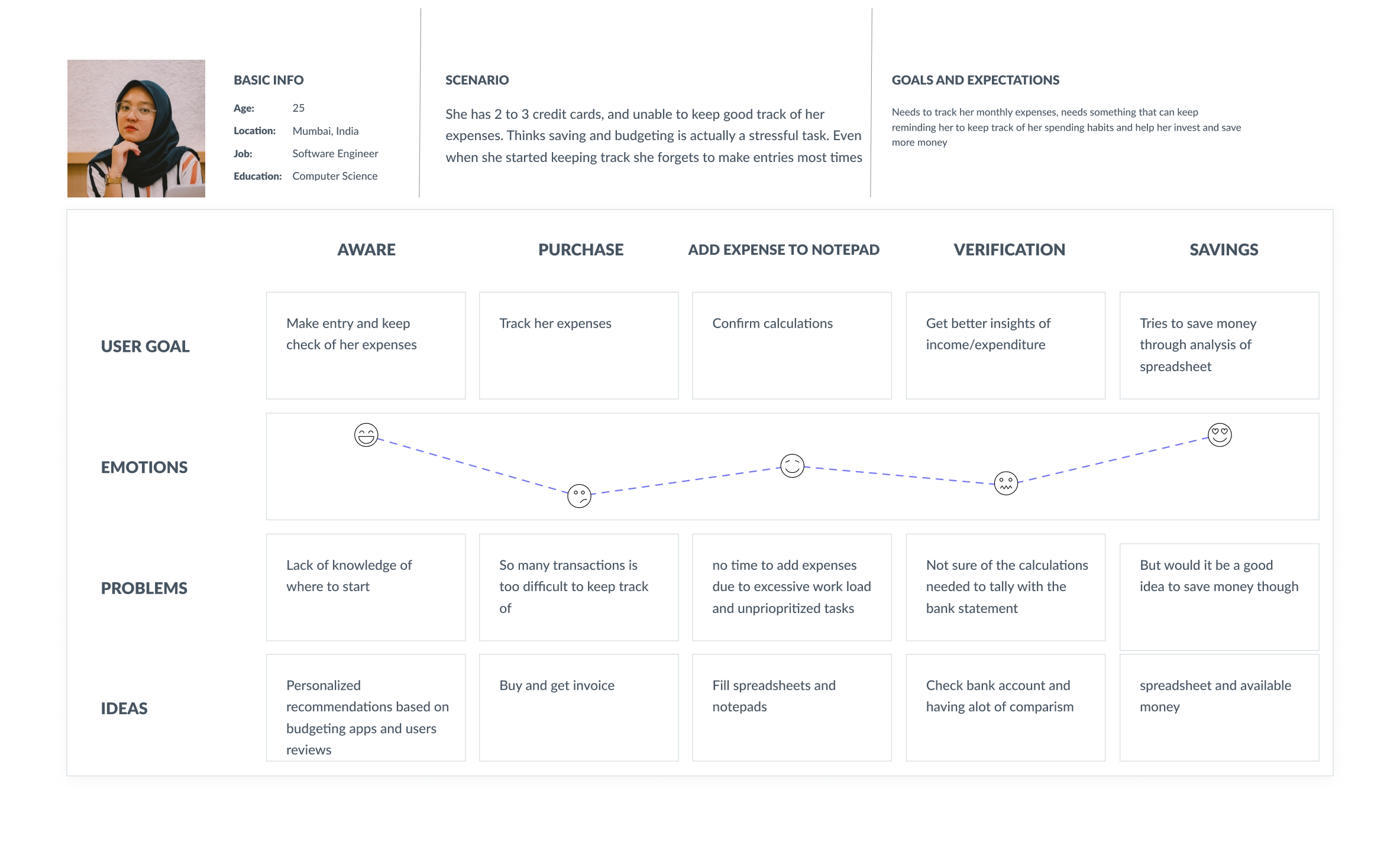 What I learned:
The user flow affected the hierarchical taxonomy of the app.

It involves the number of steps taken for the user to reach his goals. 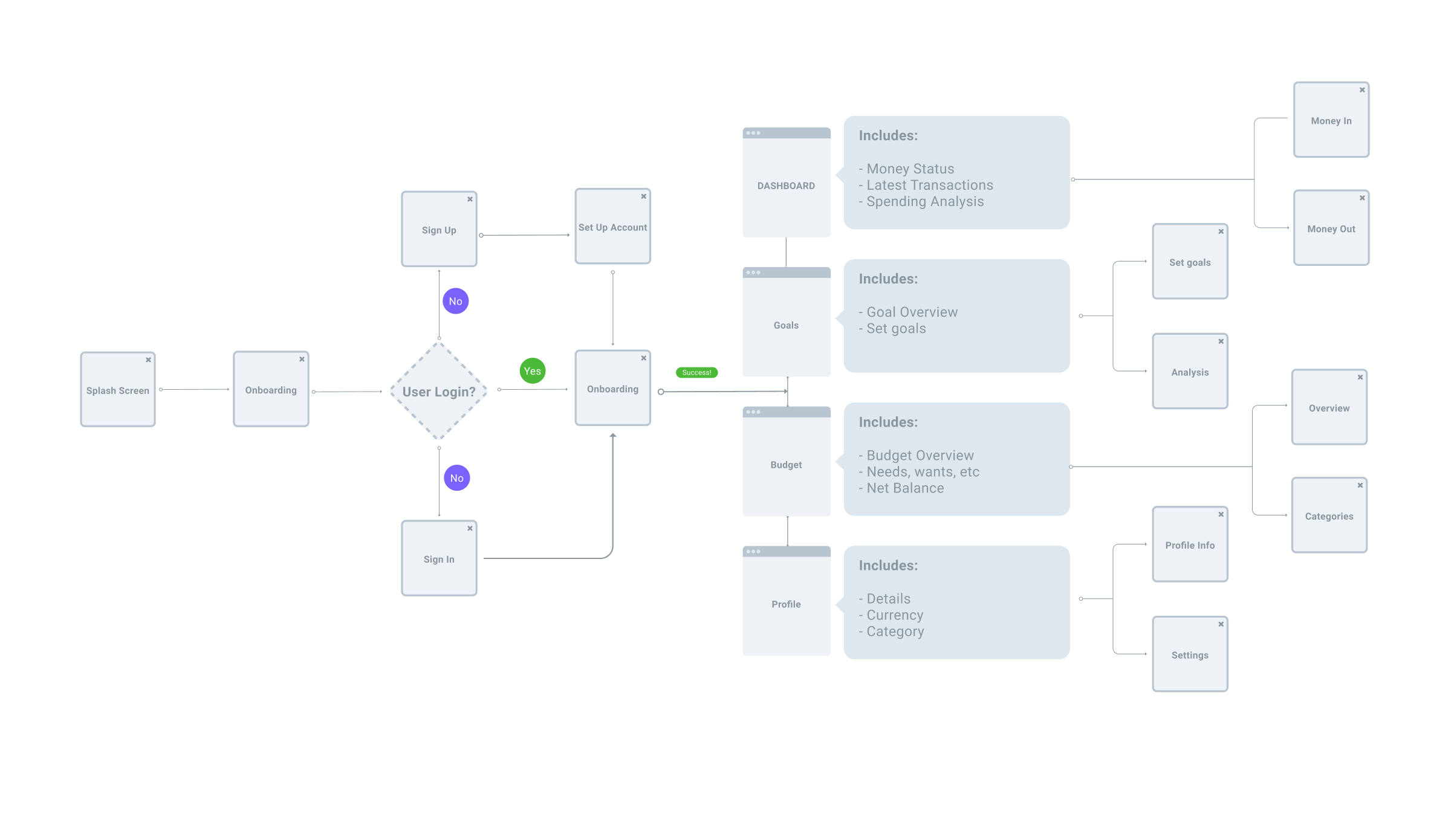 What I did:
I designed some quick sketches of the flow process screens based on information gathered from the discovery and the design phase for my lo-fi wireframes

Next, I brought the prototype up to high fidelity in Figma and did usability testing asking the user that was part of my target audience to complete an MVP tasks like onboarding, adding an expense, and checking their financial reports

Some Usability Testing I Conducted

Major Observations:
People were not sure what info was needed and why.

People were in a hurry to start placing a budget.

People were confused about how to input their expenses.

Everyone was able to do the onboarding process successfully on the app.

Some users were hitting the wrong buttons and were questioning why certain information was needed.

What I did:
Once I tested out all usability mistakes have been taken care of, I started working on the final prototype for the developers. To help the engineers know how the product should be designed.

© 2021. All rights reserved. Designed and developed by Me